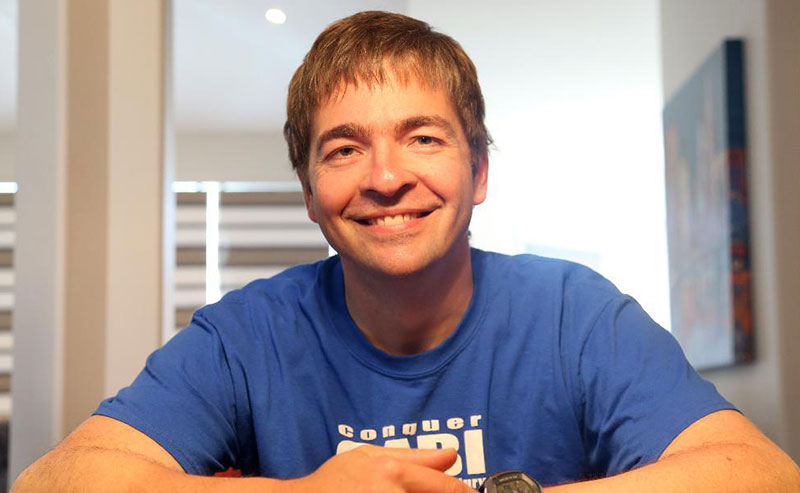 Five years ago, Robert Wein and several other cyclists were hit by a reckless driver while participating in a 100-kilometer ride. Now that he is far down the road of recovery, Wein wishes to spread awareness about traumatic brain injuries and explore how they affect the body and memory. The after effects of a severe brain injury are unpredictable, unlike other patterned injuries, like strokes.

Learning All Over Again: A Long Journey

Since the accident, which nearly ended Wein’s life, he has had to re-learn how to walk, talk, and stand. Physically, his left arm and right leg are weaker, he suffers from double vision, and he has a speak impediment. The accident has also left Wein unable to return to work as a government IT specialist. Most notably, Wein’s memory has also suffered greatly from the accident, leaving him with a very unreliable short-term memory and large missing pieces of his past memories.

Despite some recovery, Wein still struggles daily with the effects of his TBI. He explains that “my short-term memory isn’t reliable” and has developed strategies to help him remember names, dates, appointments and other information through the use of his phone and online scheduling applications. Before going to sleep each night, he repeats bits of information that he wants to consolidate into his long-term memory to himself over and over again. Though these applications and repetition patterns help, he wants to regain as much use of his memory as possible and has begun investigating how memory works, how TBI affects it, and how he can possibly reclaim his own.

Through his research and recovery, Wein has found that some memories will return once he has been prompted to recall something specific. For example, after corresponding with a former classmate from Brock University, Wein was able to remember his old room numbers for each of his years in residence.

Wein continues on his road to recovery. He explains that “I want to make the concept of my acquired brain injury an element of who I am,” he says. “I’m not embarrassed by it and I want people to know they can ask me anything. If I don’t remember something, I want that to be something we can talk about, not shy away from.” Wein continues to advocate for brain injury victims, organizing events and walks to spread awareness.

Unfortunately, TBIs are common and can completely alter one’s life, including long recovery times, personality changes, and memory loss. If you or a loved one has suffered a TBI due to the negligence of another, such as a reckless driver, you should be fully informed of your legal rights. Seek the expert help of the experienced personal injury lawyers at Barber and Associates, LLC in Anchorage, Alaska.