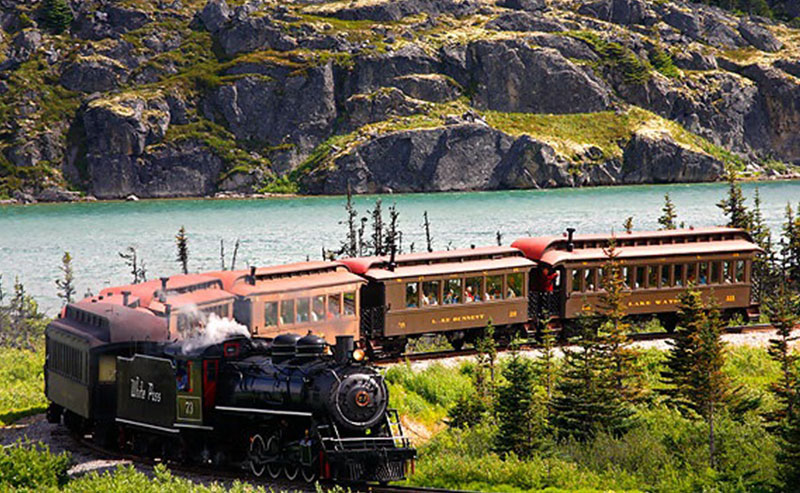 A vintage railroad company had to suspend its operation on July 24th due to a derailment that was under investigation. The White Pass and Yukon Route tourist train that hauls thousands of passengers a year along the route of the historic Klondike Gold Rush from Skagway into Canada derailed on its afternoon run. Railroad President John Finlayson said that the train derailed as it reach White Pass Summit.

rail locomotives and four passenger cars were involved. First responders at the scene outnumbered the 12 injured people, said Jeremy Zidek, spokesman for the state Department of Homeland Security and Emergency Management. The injured were taken to a clinic in Skagway, 100 miles from Juneau. Many people suffered only minor injuries and were released from the hospital three hours after the incident. Coast Guard planes and air ambulance helicopters were on standby throughout the afternoon to transport the injured, but they were not used. The local radio station, KTOO, reported that local hospitals were prepared for up to 25 victims, but that warning was later cancelled. Power was restored to the train, which eventually brought everybody back to Skagway.

The train ride is a three-hour excursion from Skagway that takes a 40-mile round trip. It climbs to 2,865 feet before reaching White Pass Summit at the far side of the route, then turning around and heading downhill back into Skagway. It is one of the railroad’s most popular routes because of the stunning views along the way: glaciers, mountains and waterfalls that surprise passengers with their beauty. People on the route can even see the trails used by the gold miners in the 1898 Gold Rush.

The seven remaining train trips of that day were cancelled to allow investigators to visit the scene of the accident. While the company regretted the inconvenience to scheduled passengers, it was vital that the track be investigated before the company could allow the safe running of trains.

At Barber and Associates, LLC, we are committed to fight for those who are injured, whether these injuries come about as the result of an automobile crash or a train crash. We have a long track record of successfully resolved cases and we understand that every personal injury claim is different. We work hard to find solutions to each case while still protecting our client’s legal rights. Whatever type of accident you have experienced, you need a personal injury lawyer to fight for you. Call us or visit our website today for a free case evaluation.