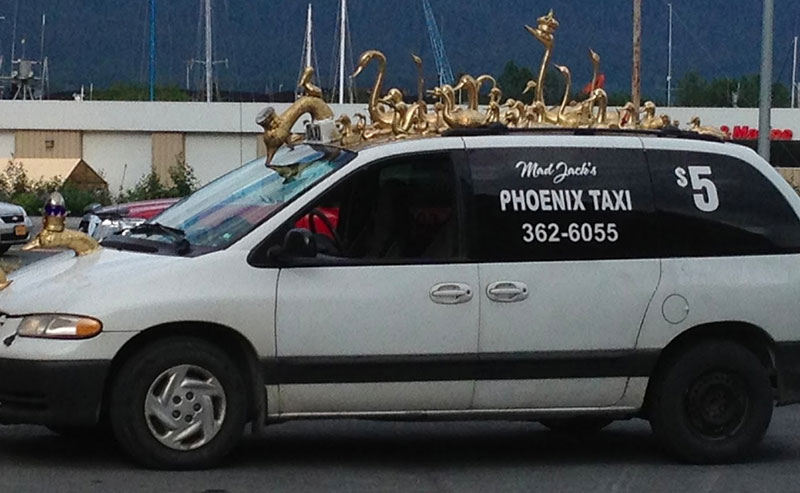 Alaska State Troopers were called to investigate a hit-and-run accident that occurred on July 27th in Seward. A taxi driver, Jack Walganski, was driving his white Chrysler Voyager cab east on Nash Road. The vehicle is a curious sight in Seward as the taxi’s front and rear are entirely covered in golden ducks with duck heads at the front of the car and ducks tails towards the back. He also has a horn that makes a duck noise. Walganski is well-known and enjoys the nickname “Mad Jack.”

At the intersections of Salmon Creek Road and Nash Road, the Chrysler Voyager was t-boned by a person driving a dark green 2001 Mazda Miata. The driver had run a stop sign just south of the place where the crash occurred, running into the duck cab and shoving Jack’s taxi headfirst into a ditch beside the intersection. The Mazda Miata ran off the road into a ditch on the other side. The driver then fled the scene before State Troopers could arrive. Walganski was found by troopers and immediately taken to Providence Seward Medical Care Center and treated for minor injuries. No other injuries were reported and no suspect was apprehended, state troopers say.

Before the taxi could be towed, many of the golden ducks that adorned the exterior of the vehicle disappeared, although police do not believe they were stolen from the vehicle but simply came off due to the impact of the crash and were picked up by onlookers. Walganski had spent years collecting them.

Alaska Car Accidents May Be Unreported

In Alaska, there were 10,000 auto accidents in 2007 which were reported to state authorities. The actual rate of automobile crashes could be higher as many crashes are not reported. A crash can happen at any time to anyone, regardless of your driving ability, and in some cases the person who hit you may not stay on the scene.

If you or a loved one has been wrongfully injured in an auto accident, it is often frustrating when you are faced with incredibly high auto repair or medical bills. You need an Alaska auto accident lawyer such as the ones at Barber and Associates, LLC who can seek justice for you and help you recover the compensation you deserve. You should not suffer from the negligence or reckless driving of another driver. Instead, take advantage of our 25 years of combined experience to feel safe in the knowledge that we will protect your rights and help you achieve the best possible outcome. Visit our office in Anchorage or book a free consultation via our website if you have a claim from an auto accident.