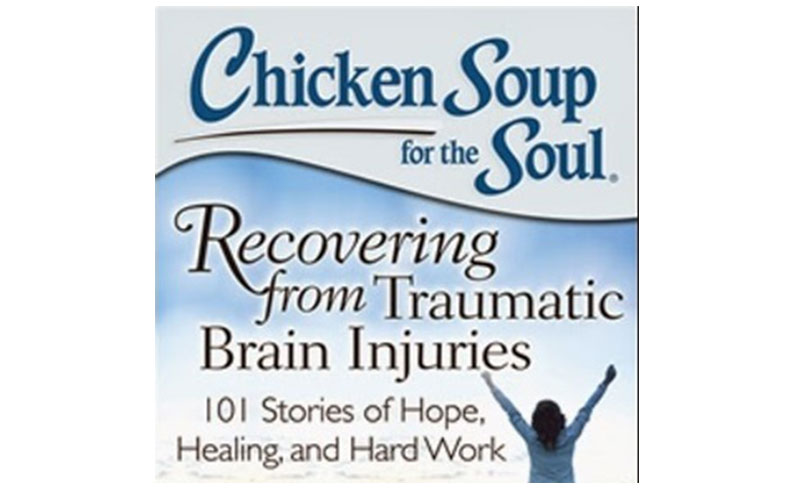 Chicken Soup for the Soul, a popular series of inspirational books, has a new author and voice of empathy for those suffering from brain injuries. Kim Conrad, a published writer of inspirational poems, has suffered from Traumatic Brain Injury or TBI since 2007 when a one-ton commercial truck smashed into the back of her car at roughly 40 miles per hour.

Chicken Soup for the Soul: Recovering from Traumatic Brain Injuries, was released in June of this year. The book contains 101 short stories and essays, including Conrad’s Finding the Glorious which details several people’s experiences of coping with TBI. When Conrad learned that Chicken Soup publishers wanted to create a book about traumatic brain injuries, she jumped at the opportunity. Conrad has spent a great deal of time since her injury reminding the pubic that families and close friends share the trauma of a TBI and advocating for a better understanding of how to deal with brain injuries.

TBI can be caused by any trauma to the head. Falls, physical assault, and car accidents are among the most common causes of these injuries.

Car accidents result in 50,000 deaths and more than 230,000 injuries in the United States every year. Approximately 80,000 of those injuries result in long-term disability. Today, there are more than five million Americans living with long term disability due to TBI. Automobile crashes account for about one-third of all TBI cases.

According to the Centers for Disease Control and Prevention, about 2.5 million emergency room visits, hospitalizations or deaths in 2010 were associated with TBI. Approximately 14 percent of those visits involved automobile crashes, such as Conrad’s.

While testimonials such as those found in Chicken Soup‘s latest book can help people deal with the emotional strain of TBI, the physical and financial strains remain a long-term dilemma that is harder to solve. In fact, survivors of traumatic accidents often suffer from disabilities that may last the rest of their lives. TBI can cause impaired thinking or memory, loss of mobility, personality changes and impaired hearing and sight. Conrad lost some of her hearing and vision from her accident.

What if I Have Suffered TBI After an Accident?

If you or someone you love has suffered TBI through the negligence of another driver or property owner, you may be entitled to financial compensation to pay for medical treatment and other issues such as long-term disability. Do not delay in seeking financial compensation, as doing so may negatively affect your claim. The lawyers at Barber and Associates, LLC in Anchorage are here to fight for victims. For a free consultation, call them today.